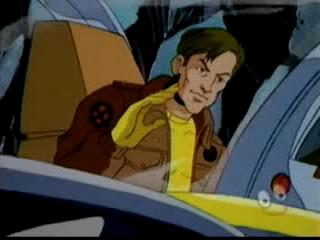 
Wikipedia: "In the X-Men animated series, Morph (voiced by Ron Rubin in the English version, and by Mitsuru Ogata in the Japanese dub) was a member of the X-Men and a close friend of Wolverine who was apparently killed in the second episode by Sentinels. Wolverine was distraught by his death (he claimed that Morph was the only one who made him laugh) and blamed Cyclops for leaving him behind, but later overcame it, as many friends have passed in front of his eyes."

It was such an angry week when the X-Men show premiered and one of the main characters was this TV-only, added on, jackass named Morph. I remember spewing the hate freely with my friends and hearing the same sentiments echoed in the comic shop.

I know his roots lie in the Changeling character, but MORPH? It was one of those "the highly successful source material is not good enough for us" move by the animated series producers. In an embarrassing attempt to sway the audience to Morph's side, the creators of the show also had Morph be Wolverine's best friend. The surliest, most popular character on the team is Morph's best friend because Morph makes him laugh. Give me a break.

The next week Morph was killed. There was rejoice.

Morph did come back as a sort of zombie, confused, disciple of Mister Sinister, in the second season.

I realized then, that the original X-Men could not go through character arcs. They couldn't be emotionally touched or moved by anything that would run over until the next episode. Cyclops in episode one had to be the same Cyclops in the last episode. Morph could change. He was the animated series' player. They could give him emotions and feelings that changed and evolved.
Essentially, Morph was the richest, most interesting, character in the X-Men animated series.