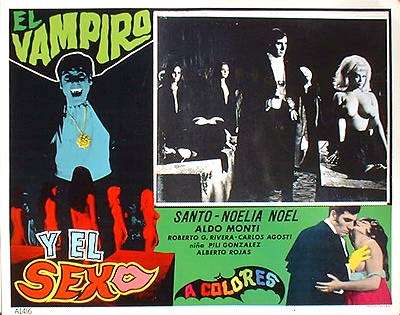 Mexican luchador and screen legend, El Santo, starred in 50 films between 1958 and 1982 (he had cameos in two additional films.)

The lobby cards for many El Santo films would have you believe they were true horror films. But don't be frightened, El Santo's films were all vanilla and fun. He made family films with lots of lucha libre action thrown in. El Santo didn't use weapons, didn't smoke, rarely drank, and never swore or lied. He was the ultimate family oriented superhero. El Santo is an icon in Mexico and I would argue, the world.

In 1968 El Santo's first color film was released in Mexico, Santo en el tesoro de Drácula. El Santo, also a scientist in this film, invents a time tunnel and sends a female volunteer back to the 19th century. El Santo and companions watch on a time television of sorts as the woman meets Cout Alucard, who reveals himself to be DRACULA. He bites the woman and El Santo saves her from the stake by bringing her back to the present time. Dracula gets resurrected in the present time and El Santo not only wants his sweet ass treasure, but must send Dracula back to the grave, PERMANENTLY! Sounds wholesome enough.

Well, in Europe, and perhaps the U.S., a version of the film was released for adult audiences. The film was titled, El vampiro y el sexo. Dracula's she-vampires were naked. El Santo does not interact with the nudie cuties, but their presence was a bit too much for Mexico at that time and completely flew in the mask of El Santo's wholesome image.

The nudie version of the film was quickly shuffled out of theaters and disappeared. For years it has been argued whether this film even existed. People claimed to have seen the film only to buckle under questioning. It was a big confusing mess. The fact that the internet can sometimes bring out the liar in some people as well as major distrust in others, never helped. For years fans said that the images of a titty biting Dracula and the lobby cards were a mistake. It was another film. I remember a lot of crazy rumors floating in the early 2000's.

UP UNTIL A COUPLE OF MONTHS AGO. It was reported that the producer of the film's grand-niece had discovered the film in dusty film cans. Last month the film was, at last, set to premiere in Mexico. Director, Guillermo del Toro had arranged a selection of vampire films to show at the Festival Internacional de Cine en Guadalajara. 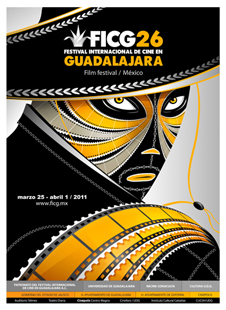 Out of nowhere, a silver masked protector of morality swooped in. El Hijo del Santo (The Son of El Santo, also a world famous luchador) had the showing stopped.

El Hijo del Santo wrote a letter to record.com (a Mexican sports magazine and website) demanding that the film not be shown. He said that his interest was not monetary but that the nudie scenes had been added without his father's consent:

"My father told his then partner, he had every right to film with their cameras what they wanted, and even make another movie, but the name El Santo and his performance and image could not be used under any circumstances . It was then that, subject to the arguments of my father, Calderon shot some scenes with Aldo Monti (Dracula) and actresses Gina Moret, Jessica Rivano, Sonia Aguilar, among others, who played the vampires in transparent gauze, showing the naked upper body and titled "The Vampire and Sex ', but never filmed another version where my father intervened." 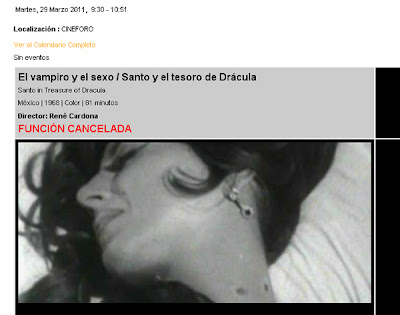 El Hijo del Santo went on to write that he had no problem with the festival displaying the nudie scenes, but not in the context of an El Santo film. El Santo films are for families and not for adults.
It's a frustrating case. I guess finding out that Pee Wee Herman masturbated in public nudie theaters may have damaged some kids' mental state, but I don't think seeing Dracula bite a big titty is going to hurt El Santo's image. Besides, El Santo kicks his ass for it. HA.

Perhaps I'm being greedy. I really want to see the film and I don't care about the impressionable kids of the world. I doubt kids today are even watching El Santo films from the 1960's, are they? 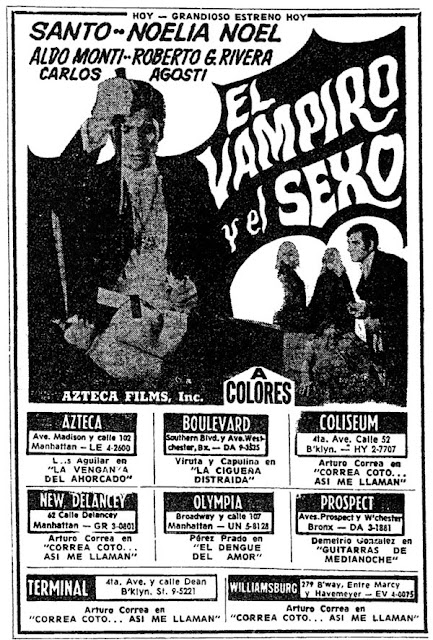