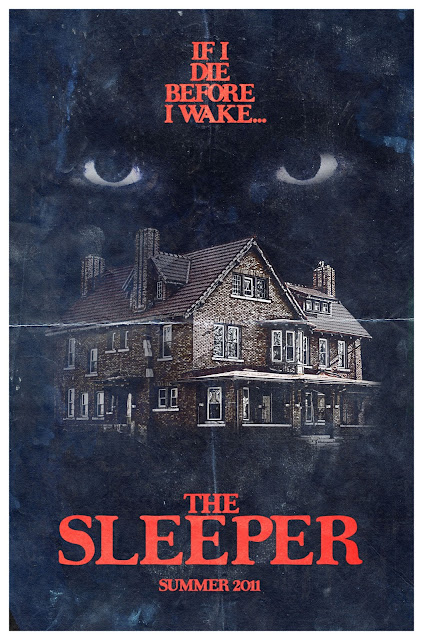 The Sleeper.
I'm not even sure if this is out yet. It looks like they failed to achieve their goal on The Sleeper's Kickstarter page.
The Sleeper comes from the good folks who made Death Stop Holocaust (which I have yet to see, because I am 90% chump.)
This poster is just as good as the Death Stop Holocaust one we featured back when that film came out. The guy on this poster is directly from one of my nightmares as a kid.
They have a Facebook page HERE.
"The Sleeper is an 80's slasher film. It follows one new pledge, Amy, as she learns the in's and out's of Alpha Gamma Theta. Little do her and the other sisters know, a stalker is watching them. As the girls shower, study, eat and sleep he lurks in the shadows studying them. One by one he finds the girls when they are at their most vulnerable, asleep, and kills them brutally. As each remaining girl gets a threatening phone call, they must fight to stay alive...alone."

Poster courtesy of Wrong Side of the Art.
Posted by Emerson M at 11:26 PM