RIP Roland Alexander and the APW King of the Indies 2001. 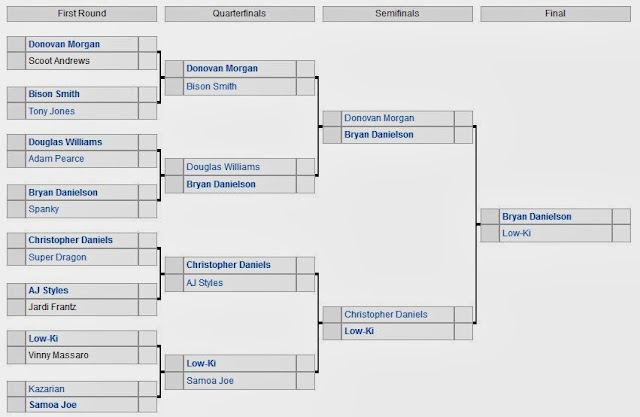 First of all, rest in peace to west coast wrestling promoter. Roland Alexander. Alexander was the founder and promoter for APW (All Pro Wrestling) based in Hayward, CA. Alexander passed away on November 5, 2013. Mike Johnson at PWInsder has a well written and thorough obituary HERE.

I attended several APW shows through the years. The shows were always good. However, through the 1990's, most independent wrestling fans were turning to hardcore wrestling, "extreme" wrestling, and promotions where the crimson was free flowing. APW always remained family friendly. I can remember only one series of matches between Vic Grimes and Erin O'Grady (Crash Holly) which took a turn to the crimson.

I met Roland Alexander a number of times. He was one of those guys who appeared to be a jerk and seemed to actively pursue the character of asshole promoter, but, to me, the words that came out of his mouth were far too kind to believe the schtick. I was allowed ringside to photograph a show when WCW scout and ex-promoter Jim Barnett came out to look at APW wrestling Michael Modest and Donovan Morgan. Alexander didn't know me. When I was working on my Bruiser Brody documentary (which became this book) he allowed me backstage at the 2001 King of the Indies tournament shows to tape interviews. There was no benefit to Alexander.

Roland Alexander had an amazing appearance in Barry Blaustein's wrestling documentary, Beyond the Mat. The guy is shown conversely as a creep, a greedy sleazeball, a concerned leader, and a tearful promoter. It's an amazing portrayal; completely insane.

Secondly, for some damn reason, I was watching old mini-dv tapes the other night, when I came across my 2001 King of the Indies tape. It's got interviews with several wrestlers and the entirety of the final match between Bryan Danielson (American Dragon) vs. Low-Ki. The version below is superior as we were one camera, one spot, and not set-up to tape matches. But the fact that Roland Alexander passed away makes the timing of my re-discovery of this tape somewhat strange.

Thirdly, look above. Look at that fucking line up! At the time, I had no idea who half the guys were. To a wrestling fan, this is some kind of insane super-card wet dream. The second night's card also featured a battle royal. Wrestler and journalist, Bryan Alvarez, was in that battle royal had this to say today:


"-- Sad to hear about the death of Roland Alexander of All Pro Wrestling. He could be a controversial character but he was always very nice to me and even booked me for the Battle Royal at the legendary King of Indies event in 2001 which in many ways directly lead to the creation of Ring of Honor, and was the first time a lot of people were exposed to guys like Low-Ki, Bryan Danielson, Spanky and others."

This was posted HERE at Wrestling Observer/Figure Four Online.
I also met wrestling journalist, Dave Meltzer, at the second night's show. Meltzer would be a great help with my Bruiser Brody book.

Here is the APW King of the Indies tournament final. Bryan Danielson vs. Low Ki.


Here is a chunk from Beyond the Mat featuring Roland Alexander. The audio is horrible.