How to become a Witchfinder General. 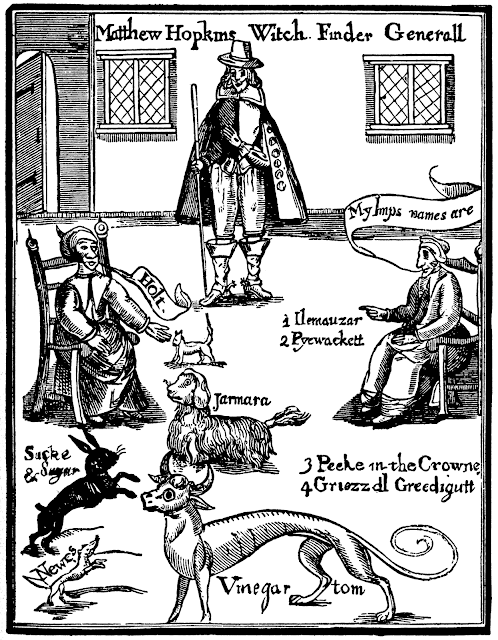 How did infamous Witchfinder General Matthew Hopkins begin his career as a witchfinder?

Let us turn to Hopkins own The Discovery of Witches: In Answer to severall QUERIES, LATELY Delivered to the Judges of Assize for the County of NORFOLK. And now published By MATTHEW HOPKINS, Witch-finder, FOR The Benefit of the whole KINGDOME. M. DC. XLVII, which is a sort of FAQ on his work.
---
Query 4.
I pray where was this experience gained? and why gained by him and not by others?

Answer.
The Discoverer never travelled far for it, but in March 1644 he had some seven or eight of that horrible sect of Witches living in the Towne where he lived, a Towne in Essex called Maningtree, with divers other adjacent Witches of other towns, who every six weeks in the night (being alwayes on the Friday night) had their meeting close by his house and had their severall solemne sacrifices there offered to the Devill, one of which this discoverer heard speaking to her Imps one night, and bid them goe to another Witch, who was thereupon apprehended, and searched, by women who had for many yeares knowne the Devills marks, and found to have three teats about her, which honest women have not: so upon command from the Justice they were to keep her from sleep two or three nights, expecting in that time to see her familiars, which the fourth night she called in by their severall names, and told them what shapes, a quarter of an houre before they came in, there being ten of us in the roome, the first she called was

2. Jarmara, who came in like a fat Spaniel without any legs at all, she said she kept him fat, for she clapt her hand on her belly and said he suckt good blood from her body.

3. Vinegar Tom, who was like a long-legg'd Greyhound, with an head like an Oxe, with a long taile and broad eyes, who when this discoverer spoke to, and bade him goe to the place provided for him and his Angels, immediately transformed himselfe into the shape of a child of foure yeeres old without a head, and gave halfe a dozen turnes about the house, and vanished at the doore.

5. Newes, like a Polcat. All these vanished away in a little time. Immediately after this Witch confessed severall other Witches, from whom she had her Imps, and named to divers women where their marks were, the number of their Marks, and Imps, and Imps names, as Elemanzer, Pyewacket, Peckin the Crown, Grizzel, Greedigut, &c. which no mortall could invent; and upon their searches the same Markes were found, the same number, and in the same place, and the like confessions from them of the same Imps, (though they knew not that we were told before) and so peached one another thereabouts that joyned together in the like damnable practise that in our Hundred in Essex, 29. were condemned at once, 4. brought 25. Miles to be hanged, where this Discoverer lives, for sending the Devill like a Beare to kill him in his garden, so by seeing diverse of the mens Papps, and trying wayes with hundreds of them, he gained this experience, and for ought he knowes any man else may find them as well as he and his company, if they had the same skill and experience.
---

Let's assume that Hopkins just made this stuff up. Where did it come from? Stories he had heard about witches? Childhood stories? It is richly insane. Wikipedia says his about the time referenced above:

Hopkins states in his book The Discovery of Witches that he "never travelled far ... to gain his experience". In the early 1640s Hopkins moved to Manningtree, Essex, a town across the River Stour from Colchester, about 9 miles (14 km) from Wenham. According to tradition Hopkins used his recently acquired inheritance of a hundred marks to establish himself as a gentleman and to buy the Thorn Inn in Mistley. From the way that he presented evidence in trials, Hopkins is commonly thought to have been trained as a lawyer, but there is scant evidence to suggest this was the case.

Matthew Hopkins began hunting witches in 1644. He retired only three years later in 1647. He and his associates had been responsible for the executions of over three hundred women.

It all sounds so insanely old and ridiculous until you realize that witch hunting is still going on today in some parts of the world.

Project Guttenberg has the full text of The Discovery of Witches HERE.
The image above is from a reprint of 1841/1852 editions of Extraordinary Popular Delusions and the Madness of Crowds by Charles Mackay and was found HERE.