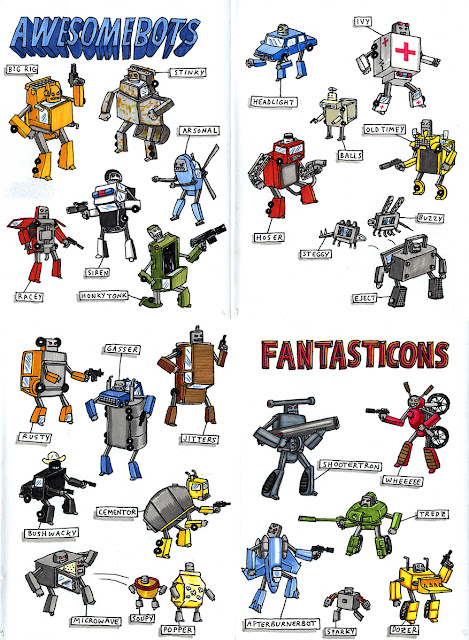 I hated The Transformers as a kid. I think everyone hated the Go-Bots.

The toys were boring.

The Transformers cartoon aired after GI Joe but we didn't watch it. When the "Knowing is half the battle" PSA's would air, the TV would get turned off until 6pm and Good Times would come on.
I was in Comicopolis a couple of weeks ago when I spied a section of what looked like old mini-comics from the 90's. I picked the first Incredible Change-Bots up and didn't look back. It just grabbed me like no comic has in years. I knew I had to own it before I even flipped through it.

The Incredible Change-Bots is Jeffrey Brown's part tribute, part satire of the Go-Bots and Tranformers. There are two volumes, so far. More on the way.
The books are 5x6.5" mini books done in Jeffrey Brown's eyeballed straightline style. The colors are done with Faber-Castell brush markers and the whole package just smells of independent brilliance. When you read them, you feel like you are in on an important secret. The humor doesn't bash your skull in, it is warmer and referential without being reverential. Change-Bots never tries too hard, it machetes out it's own path and stands on it's own.

My favorite part of Jeffrey Brown's work is the pacing. The story moves. The smaller scenes move. There are great reaction panels and emotion is clear and sympathetic, even in the smallest panels of hand drawn robots.

The Change-Bots are divided into two warring factions, the Fantasticons and the Awesomebots. They have destroyed their own planet of Electronocybercircuitron and come to Earth to continue their Change-Bot war.

Thanks to Jeffrey Brown for answering my questions.


1. Can you talk about the future of Change-Bots?
I've already got a collection of B-sides, extras and miscellaneous stories that should come out in 2013 called Incredible Change-Bots Two Point Something Something. Hopefully that will tide people over while I work on Incredible Change-Bots Three. That book will include my parody of G.I.Joe, and I hope I can match my ambition with it - it should have the most complicated Change-Bots plot yet, but my first concern will still be just making it a fun book with plenty of nonsense. 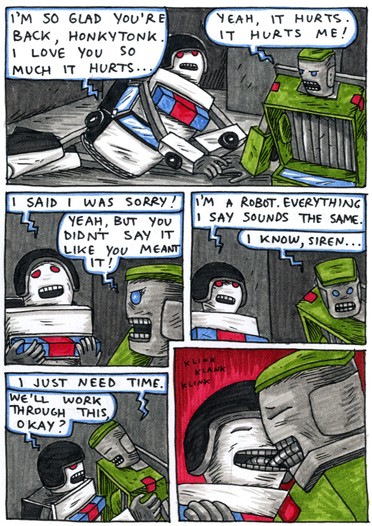 2. Will Siren ever open her hood to Honkeytonk?

I haven't quite decided where Siren and Honkytonk's tumultuous relationship will go yet, but I did write a short story called "Young Rust" which is about how they first started dating. That'll be included in Change-Bots Two Point Something Something.

3. Can you talk about your process in illustrating Change-Bots? I see the originals are 4.5x6" and pen & ink and Faber-Castell Brush Marker.
I start off collecting all the ideas and jokes I want to put in, and start arranging those within a really loose plot I have for the book. Eventually that gets worked over to the point where I can create a page by page script - it's a script where I generally know what's happening each page, and many times joke(s) that are going to happen on those pages, but it's still loose enough that I can make lots of changes as I go. Then I start pencilling the book, which also essentially includes finalizing the writing. I'll pencil about ten pages or so at a time, with the pencils being more like full size thumbnails. It's not quite stick figure drawing, but it's not too much more detailed most of the time. The first two books were drawn straight in a blank sketchbook, although for book three I might switch to drawing each page on illustration board. I draw the line work with the Faber-Castell Pitt pens (superfine tip), erase the pencils, and then color with the Faber-Castell brush pens. After that I use another Pitt pen (this time with the ExtraSuperFine tip) to add a little detail and texture to the drawings. When I finish four or five pages I'll cut them out of the book to scan them.

4. Can you talk a bit about the screenplay your wrote? I read on your blog that the film was just accepted at Sundance.
The screenplay is for a film called Save The Date. I started working on it five years ago, after getting an email from producer Jordan Horowitz, who hadn't really made any movies yet. He got me started and I came up with a semi-autobiographical story idea, which I then had trouble making into a screenplay - I could structure it the way I write my comics, but not film, and I also wasn't too confident in formatting properly for a movie. Jordan brought in Egan Reich, and the two of us developed the screenplay further. The film was almost made a couple years ago with fellow Chicagoan Joe Swanberg directing, but scheduling and financing issues scuttled it at the last minute. In the meantime, Jordan worked on The Kids Are Alright and met director Mike Mohan, who came on and re-wrote the script again. That script was the tightest yet and they managed to bring in an amazing cast. I also ended up drawing a ton of artwork for the film, as one of the characters draws and ends up having an art show. I'm really happy with how the film has turned out, I think everyone that worked on it did an amazing job contributing. I'm still processing the fact that this germ of an idea has turned into an actual film that will be playing at Sundance. 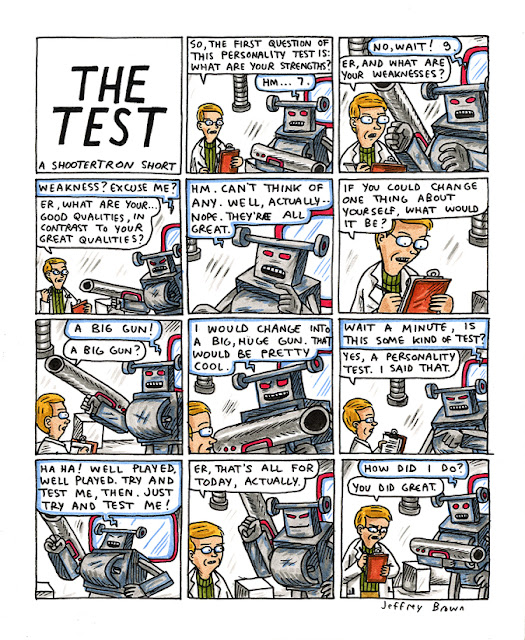 5. In writing Change-Bots do you have extensive back stories for each character?

I kind of write the back stories as I go, although for the third book I'm starting to do a little bit more of that. Usually what I do is write the characters into some situation that sets me up to explore some untold history. Someday I may draw an Incredible Change-Bots Zero, which of course would be the robots' stories back on Electronocybercircuitron.

6. What comics are you reading?
I still read most of what's published by the indie/alternative publishers like Fantagraphics, Drawn & Quarterly and Top Shelf. I've really liked the books coming out from UK publisher Nobrow as well. I still read any Hellboy or B.P.R.D. books, and I've been keeping up with Walking Dead and Fables. I read most of whatever Grant Morrison writes, and pick up a somewhat random assortment of Marvel titles - basically whatever catches my eye or feeds some urge each week. I also try to read as many mini-comics as I kind find, although not as much as I used to, since I no longer live within walking distance of Quimby's, which is basically the best shop for minicomics and zines in Chicago, if not the U.S.

7. What's the next book you have coming out?
The main reason Change-Bots Two Point Something Something isn't coming out in 2012 already is that I've got an official Star Wars book coming out. It's called Darth Vader and son, and basically it's a collection of gags and vignettes about Darth Vader trying to raise a four year old Luke Skywalker - trying to get him to pick up his toys and teaching him how to ride a bike and stuff.

Super duper thanks to Jeffrey Brown for taking the time to answer my questions. I'm a little bummed that there won't be any Change-Bot books until 2013 but I will give his other books a read.
HERE's the page for ordering books.
HERE is Jeffrey Brown's blog.
HERE's a really cool page with original Change-Bots art for sale. The art in this post is from this site. Go buy art NOW.
Hey, someone also did a short video of Incredible Change-Bots. The comic is not as slapstick as this video. 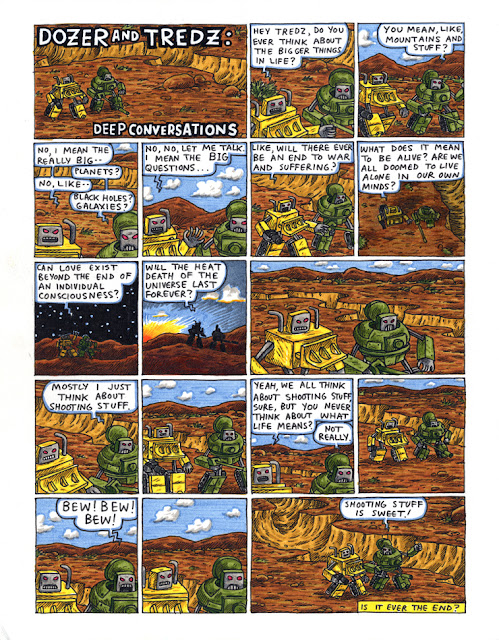 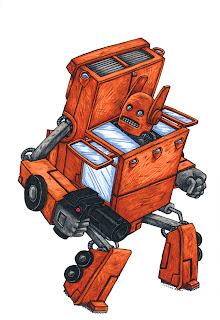 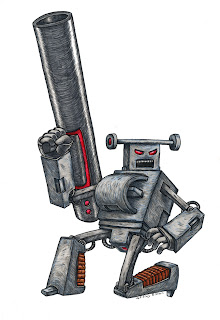 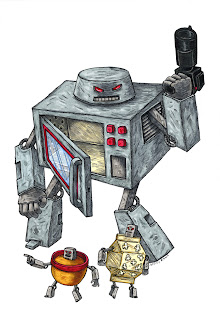