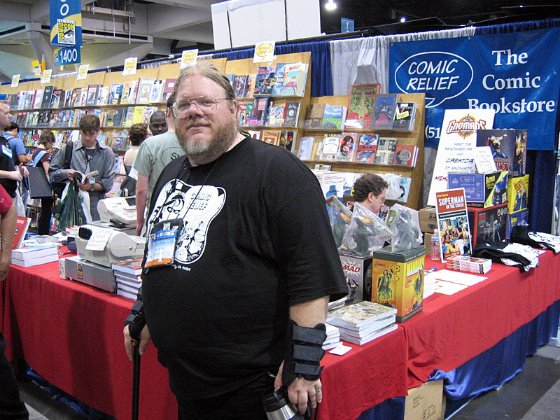 Damn, fuck, hell. Rory Root passed away earlier this week. He is an icon in the comics world. A lot of fans may not know who Rory is, but I bet every professional working in comics knows Rory. He owned Comic Relief in Berkeley. The greatest comic bookstore in the world.
I did not know Rory very well, but I did spend one very surreal night with him in his shop. My friend Sean was working on Rory's computer in the old shop and Rory and I talked and talked and talked. He sat on his stool and I sat on the floor and we were there until past 5:00 in the morning. He had just found out that he had sleep apnea and told me to get checked (I am also a fat man.) We talked health, comics, religion, food, diet, being fat, all sorts of stuff. I felt like I had known the guy my whole life. I cannot attest to who he was to other people and what kind of person he was. But to me, on the couple of times I met him, and that one night. He was serious, not super friendly. He listened and didn't just talk like so many people do. We talked about loneliness. One other thing. All the while we talked, Sean would chime in from the computer every once in a while. Whenever we mentioned a comic or graphic novel that Sean liked, Sean would comment. Rory would put his finger over his lips to me, "shhhhhhh." And slip a copy of that mentioned comic into a bag for Sean.
A sad week.
Posted by Emerson M at 9:13 AM