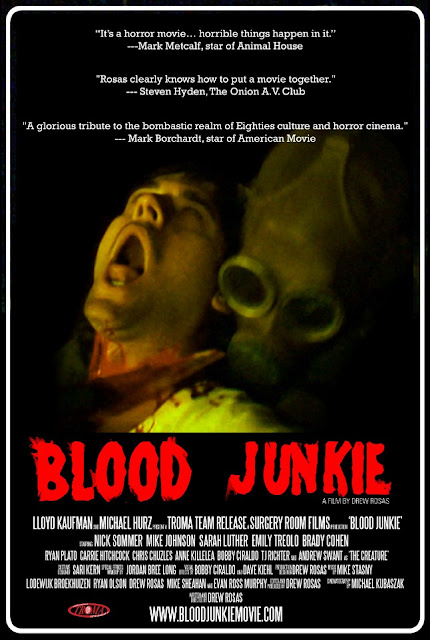 Blood Junkie is a retro-80's slasher film from 2010. Like all good retro films it takes all the goodies of the genre and discards the crap. Everyone is dressed to the nines in 80's garb; the music is over the top synth; the pace of the film is grindingly 80's. It is a fantastic film if that is what you're looking for. There are a couple of spots that take you out of the rad 80's universe, but for the most part you could trick a ten year old, "This is how it was, dude."

The film has a strange guy aspect to it. It felt like a group of guys made the film and didn't really know the female leads. The pillow fight, rumpus, topless, pillow fight of the 80's slasher becomes a drunken homo-erotic, wrestlefest with the two lead males. It is funny. I laughed. But, imposing modern sensibilities can destroy a retro film. This teetered on the edge, but was saved by the fact that one of the leads may be secretly in love with the other. The shit hits the fan and survival mode kicks in before his feelings can be explored. I've always felt that most third acts are poisonous to the rest of the film. This third act is saved by some hilarious dialog and sudden transformation of the aforementioned lead into a wannabe 80's action hero.

The women are great. They just have the 80's down pat. The looks, the unrealistic, Hollywood horndog promiscuous sensibilities, and their acting is fine. The completely over the top use of body doubles for the nude scenes is funny, annoying, and goes to the theory that this was a group of guys that made the film. I could see them too afraid to ask the actress' before hand, to show some skin.

The gore is standard for the genre. The camerawork, color timing, and editing are fantastic. The pacing was slow and perfect. The killer has a great back story (I wish they would have shown more, with cutaways) and a great look. I felt like they showed the killer a bit too much. Three minutes of the killer carting a body around in a wheelbarrow could have been cut down a bit.

The ending is surprising, all together impossible, funny, and pitch perfect.

I liked the film a lot. I will watch this team's newer film, Billy Club. I love the wave of retro-80's horror films over the last few years.