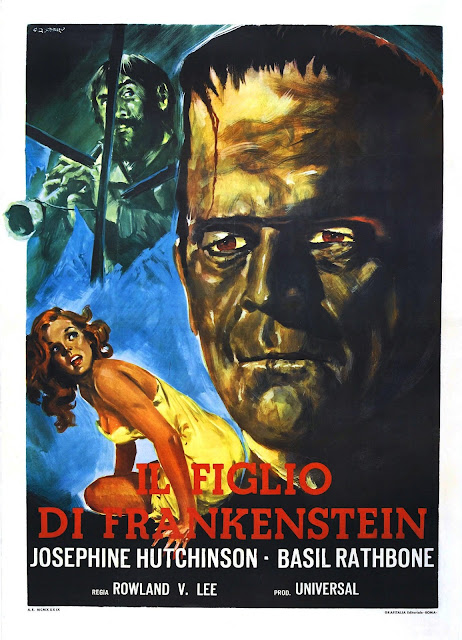 Son of Frankenstein.
Kharis used to be my favorite Universal monster. In recent years, he has been replaced by the flute playing, sadistic, sociopath, Ygor. I believe Ygor is Bela Lugosi's finest role and the character deserves to rank up there with The Monster, Dracula, The Wolf Man, and all the other classic Universal monsters.
This poster is striking. Karloff's face is beautifully rendered and while the girl is straight out of some other film, she adds a certain amount of peril and excitement to the poster. Karloff's emotionless mug isn't exactly thrilling. 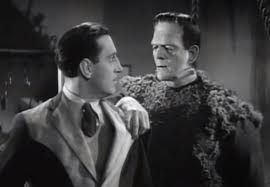 Vince sent me this funny email recently regarding Son of Frankenstein:


A couple of weeks ago I watched Son of Frankenstein on Turner Classic Movies. Now an interesting criticism of that movie came from writer Tom Weaver in an article he did on the Universal Frankenstein series in one of my magazines. He says that director Rowland V. Lee screws up the Monster's height, making him appear shorter than Wolf Frankenstein and Ygor. I saw for myself this isn't entirely true. He certainly isn't the shortest of the three. BUT Wolf IS the same height and Ygor is real close! Yet in all the other films, the Monster is easily a full head to a head and shoulder taller than anyone else.
What's screwy too is that the Monster is bulkier here than in any other film. He may not be fat but he sure looks like he has eaten both sides of the menu. I guess this is the reason Peter refers to him as a giant! At least in the sequel, The Ghost of Frankenstein, the Monster really does appear to be a giant.
And yes, I checked, Boris Karloff was wearing his big Monster boots and Basil Rathbone was still able to look him in the eye. For shame!
Plus in this ponderous (for Universal) horror96-minute picture, the Monster doesn't get off his rear until an hour into the movie. All I can say is Thank God for Ygor! Lugosi saves this movie just liked he saved Dracula. 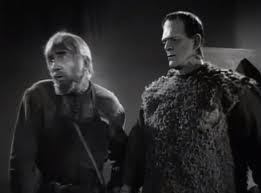 Hahhahah, the pictures don't lie, The Monster looks a bit wee. I also completely agree with Vince that The Monster is oafy looking in Son of Frankenstein and like so many of the mid to late Universal monster movies, the monsters hardly get any damn action. Monsters are monsters through their actions, not through people talking about them being monsters!
Ah well, it's a decent outing, and like Vince and I both mentioned, Lugosi's performance as Ygor twists the wrist into giving Son of Frankenstein a thumbs up.


Poster courtesy of Wrong Side of the Art.
Posted by Emerson M at 9:53 AM