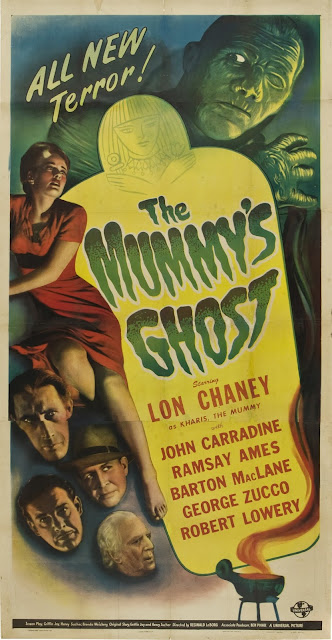 The Mummy's Ghost.
The Mummy's Ghost is the third film in the Kharis series. It is one of the first films I saw on Creature Features and one of my favorite Universal horror films.
The film boasts one of the grandest and rarest honors in all of monster movie history. The Mummy wins! He gets what he desires, while the townsfolk and distraught boyfriend can only look on and cry in anguish as the starlet dies.
Lon Chaney Jr. is ever-imposing as the slow but unstoppable Kharis. John Carradine is miscast but rises to the role of, Yousef Bey, a priest of Arkan. Is Bey related to Ardath Bey, the name that Imhotep used in the original The Mummy? Carradine's wide eyed acting is hammy and wonderful. His voice will melt your ear drums. The hero of the film isn't too annoying. Ramsay Ames plays the reincarnated Ananka. She was one of the true Hollywood starlets, likeable, troubled, and beautiful. George Zucco does a fine job playing the crusty high priest, who sends Yousef Bey to America to fetch the mummies of Princess Ananka and Kharis.
The truth of the matter is that nearly all classic mummy movies, both Universal and Hammer, have the same basic story. This is one of the finer outings with some legendary horror actors, a few twists along the way, and a fantastic ending, which I have un-remorsefully ruined for you.
Here's the trailer. Murdering! Destroying!