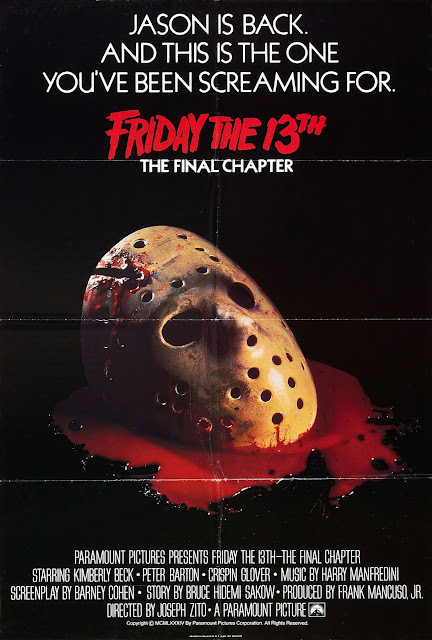 Friday the 13th part 4. The Final Chapter.
Happy Friday the 13th!
Not sure why the image is reversed, Jason took an axe to the left side of his melon at the end of Part 3. It is a fine slasher poster nonetheless. Simple, to the point, gratuitous.
Part 4 is my favorite film in the franchise. The teens are mostly interesting. The Jarvis family is interesting. Tommy Jarvis, played by Corey Feldman, is actually pretty likeable. Jason is still a human, monster, killing machine. This was touted as the final in the series, and for a couple of years, it was. When Jason comes back from his "death" in this film, it is through lightening and hate magics. The Jason in Part 4 is still something of a man.
Goremaster Tom Savini came back to provide special effects. He created Jason in Part 1 and got to "kill" him in this one. Savini was on the top of the world at this point. I remember watching him on David Letterman with the Jason head during promotion for this film. The kills in the movie are slasher film gold. There is a fantastic throat slashing near the beginning. Jason's death is fabulously way over the top gory for the franchise and time period.
The film opened on April 13, 1984.


Here is Tom Savini's appearance on David Letterman. Major spoiler, though. It shows Jason's face and the nature of his "death" at the end of Part 4.

Poster courtesy of Wrong Side of the Art.
Posted by Emerson M at 4:05 PM