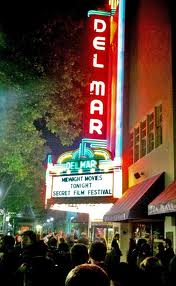 My wife and I just got back from the 2012 Secret Film Festival at the Del Mar Theater. This year had another fine selection of soon-to-be released films.
The festival itself is apparently not a secret to the locals, like last year, it was sold out. The real secret is that the line up of films is unknown. The host gives a few spare details just before the projector rolls.
In some cases, a second feature starts upstairs, five minutes after the main feature. The festival runs from midnight until noon.
Before the festival a show of hands revealed that only one person in the audience had been at all seven Secret Film Festivals (I guess it was called something different years ago.)
The only negative that I found at the festival was that vocal pockets of the audience complained loudly at having to watch so many films with subtitles. I'm not sure what they expected, but I straight up heard complaints at having to read, at least a half dozen times. Some complaints bordered on racism. "I don't speak foreign!" one fuckface yelled.
If you read this and are thinking about going to The Secret Film Festival, if you don't like subtitled films, stay home!

There were 6.1 films downstairs and 2 separate films upstairs. The links embedded in the titles should take you to the respective film's trailer on YouTube.
After the films there was a raffle. We didn't win anything and that was all right. We did see local artist Frank Trueba and Lauren from Marini's there.
Thus ends another Santa Cruz Secret Film Festival. Thanks to the Del Mar and our host, Scott. They did a fantastic job. I can't wait until next year. 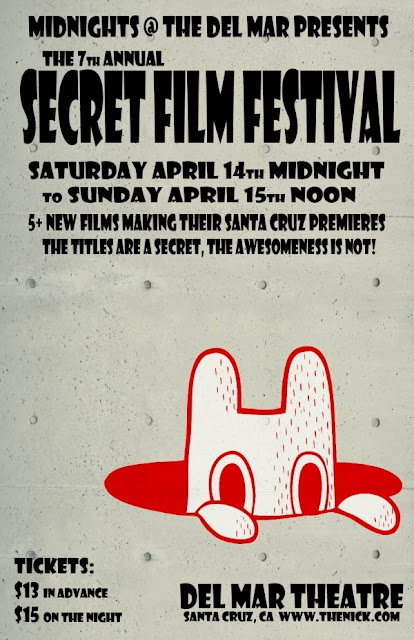